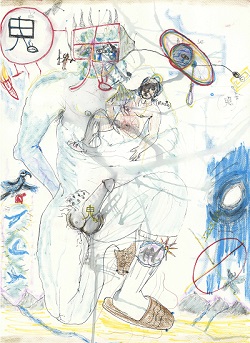 The lyrical autobiographical drawings and poems by Arturo Desimone show a layered world view. The work has a visual language that is derived from the different cultures that Desimone encountered in his nomadic life, with his upbringing in the Caribbean in a family of Argentinean and Polish origins. In his first solo exhibition at Gallery Vriend van Bavink Arturo Desimone shows a collection of autobiographical bestiaries.

Bestiaries are medieval authoritative manuscripts that once were considered as trusted art and science documents. They detail those beasts and monstrosities that were believed to inhabit wildernesses near and far. The ﬁrst conquerors of the Americas employed map-makers, who also detailed the different kinds of monsters, giants and giantesses that inhabited the New World, such as the island Aruba. And Aruba is the place where the artist of this auto-bestiary was born and lived his ﬁrst 20 years, a diasporic coordinate between the Caribbean and Latin America.

“The day I began to live and behave in a more nomadic way, I kept notebooks that departed from my more usual forms of creative activity. These notebooks ﬁlled with bestiaries, drawings that combined human and animal ﬁgures, with symbols from the religions I have encountered, and notes from songs: an interplay of my experiences, suffering, pleasures, memories, poems, stories and forces surrounding me as I went about travelling like a wayfarer, a Homo Viator. Restless travelling  does not change how the artist’s primary concern lies with inner experience… Geography looks absurd in relation to art.”
During the years, an autobiographical bestiary came into being and grew, fed by wandering. Desimone carried this to the mountains of the Cevenne to the Netherlands, to a forgotten Poland and to Tunisia in revolution, from the Atlas to the Andes. With his drawings Desimone seeks to reveal the mad and silly ways in which we all succumb to the pursuit of power or unnecessary obedience and the forgiving nature of the sensual worlds. He wants the spectator to accept, see and embrace the comedy in death (a great gift) and the baseness in all politics.
‘My jargon rings truer than most jargons, unlike the academics, my Harry Houdini-act of jargon unchains for I am a delinquent poet.”